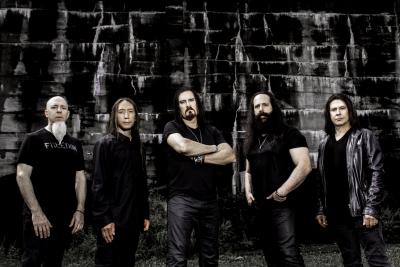 This Artist is represented in cooperation and in conjunction with APA Agency / Keith Naisbitt, USA

Chemistry triggers action. The bonds of disparate elements yield friction, energy, and ultimately incite creation. It happens throughout all of existence—especially in music. The music of Dream Theater relies on the interplay and brotherhood of the musicians as much as it does on the harmony of the instruments. In fact, the chemistry the band unlocked upon forming in 1985 remains central to the music they create today.  The progressive metal pioneers—James LaBrie (Vocals), John Petrucci (Guitars), Jordan Rudess (Keyboards), John Myung (Bass), and Mike Mangini (Drums)— share a unique bond with one of the most passionate fan bases around the globe as evidenced by their two GRAMMY® Award nominations and 15 million records sold worldwide.

Among numerous accolades, 1992’s Images & Words received a gold certification and landed on Rolling Stone’s coveted “100 Greatest Metal Albums of All-Time.” Meanwhile, Guitar World placed Awake at #1 on “Superunknown: 50 Iconic Albums That Defined 1994.” Excerpts of 1996’s A Change of Seasons notably soundtracked NBC’s coverage of Downhill Skiing at the 2002 Winter Olympics. Fans voted the 1999 Metropolis Pt. 2: Scenes from a Memory the “Number One All-Time Progressive Rock Album” in a 2012 Rolling Stone poll. Not to mention, it ranked as the “15th Greatest Concept Album” by Classic Rock.

2009 saw Black Clouds & Silver Linings crash the Billboard Top 200 at #6 as A Dramatic Turn of Events [2011] and Dream Theater [2013] maintained a three-peat in the chart’s Top 10. Most recently, 2016’s The Astonishing attracted widespread praise with Consequence of Sound dubbing it, “An absolutely unique experience.”

In addition to releasing three platinum videos and two gold videos, the group would be inducted into the Long Island Music Hall of Fame in 2010. On its 14th full-length and first release for InsideOutMusic / Sony Music, Distance Over Time, the band recharge the brotherhood that has kept them creating music together for over 30 years.

For the first time in two decades, the bandmates lived, wrote and recorded together over a four-month period at the secluded, five-acre Yonderbarn studios in Monticello, NY. They all moved into the property’s country-house where they shared memories, took turns manning the BBQ and fortifying lifelong friendships as the music happened organically and spontaneously throughout the summer in the beautifully converted barn only footsteps away.

“Of course we’ve written many records together, but we’ll traditionally move into a studio to track the record and during that time everybody either commutes or stays in a hotel,” says Petrucci. “This time around we approached things differently; up at Yonderbarn there were no distractions so we were able to just focus on being creative, spending twelve-to-fourteen hours a day working while also having fun in between the writing sessions. We’d take turns cooking for each other like brothers in a fire house and since it was summertime, the upstate New York weather was beautiful. There’s something about jamming and writing as a unit while you’re bonding, eating, drinking bourbon and just hanging out that helps infuse the music with a special feeling and a raw, palpable energy.”

“It was like going back to summer camp,” grins LaBrie. “Being around each other the whole time made it that much more of a profound experience. I think the songs reflect the energy. It was a lot of fun to have a situation so powerful at this point in our career.”

“With what we had to do and the kind of record we wanted to make, it was the right way to write and record,” adds Rudess. “When we would lay out all of the parts and start composing, there was a feeling we hadn’t felt in a long time. There were a lot of smiles.”

With every reason to smile, the five musicians immediately locked into a groove and identified a collective vision. They upheld the hallmarks of their signature sound combining metallic aggression and progressive scope, but within the framework of tighter songwriting.

“Everybody felt like it was time to return to the roots and make a more organic record,” Petrucci elaborates. “We collaborated to bring back the heavy and proggy sides of what we do and make music that’s really fun to play. The environment empowered us to do so.”

Album opener “Untethered Angel” commences with ominous clean guitar before ramping up into a hypnotic and hard-hitting riff that gives way to a sweeping and soaring hook. Heavily employing Hammond X5, Rudess locks into an “organ-and-guitar” call-and-response with Petrucci, evoking classic prog while charting new territory all the same.

“John has some of the most tastefully crafted leads in the business, so that forces me to step up my game to the max,” Rudess goes on. “It opened up a different avenue for us to trade back and forth.”

“Subject-wise, it’s about me seeing that a lot of people, especially our youth, are afraid to take their lives in certain directions because of fear,” explains Petrucci. “They have fear of the unknown, fear of what other people think, and fear of not being good enough. So, the song urges letting go of yourself, not letting fear win, and untethering yourself from the feeling of fear that stops you from doing things.”

The ten-minute “At Wit’s End” swings from sharp shredding into a thick groove as LaBrie paints an intense portrait of the aftermath of abuse.

“When women have been violated, they suffer from PTSD,” says the singer. “They can never really view themselves as the same people, because for all intents and purposes, they aren’t. It creates a lot of divide in relationships. It can be impossible for couples to overcome. In a lot of instances, they don’t make it, and they break apart. In the song, the woman is at her wit’s end, and the man is assuring her they can get through it.”

“Barstool Warrior” offers up an intimate slice of small town lore with cinematic lyrics as “Out of Reach” sees the band stretch its wings with a poetic ballad with lyrics penned by LaBrie. The haunting and maddening “Room 137” marks the first time Mangini contributed lyrics to a Dream Theater song, while everything culminates on the epic-sounding “Pale Blue Dot,” which “highlights Carl Sagan’s meaningful reflection on humankind’s fleeting nature and our responsibility to deal more kindly with one another and to cherish the ‘Pale Blue Dot’ which is Earth.” as Petrucci puts it.

In the end, the union between Dream Theater stands at its strongest on Distance Over Time—as does the music.

“This record is all about the experience for us,” Petrucci leaves off. “The process and environment were a big part of the meaning and significance. I hope people walk away with the feeling of unity, camaraderie, joy, and inclusion we felt. There’s a spirit, which is really magical. When I listen back to the album, I can distinctly recall every moment of the writing process; where I was standing in the room, what inspired us in that instant and the meaning behind each song. As a producer, my goal was to try and create the best-sounding Dream Theater record we’ve ever made so that listeners can just be enveloped in the music. I really wanted this recording to truly reflect the spirit, joy and passion that went into making the album and for people to walk away feeling some of the organic nature, personality and raw energy that the band captured while together in the studio. For me, I think it accomplishes that and I hope that other people will feel the same way.” – Rick Florino, November 2018