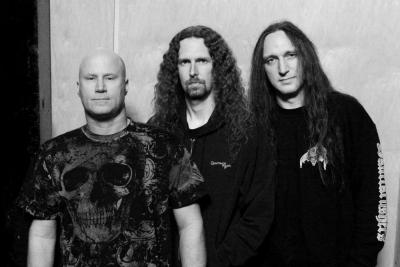 This Artist is represented in cooperation and in conjunction with Continental Concerts.

Formed in 1984, Heathen was part of the first wave of Bay Area Thrash bands that helped establish a genre of heavy metal that remains popular to this day. The band gained initial success with their first album, “Breaking the Silence,” released on Combat Records in 1987. Driven by the riffs and harmonic structure provided by guitarist Lee Altus and the memorable vocals of David White, the album showcased Heathen’s signature sound, mixing aggression and melody. Just prior to the “Breaking the Silence” tour, drummer Darren Minter joined Heathen’s lineup, bringing a more powerful backbone to the band.

After a series of label negotiations, Heathen left Combat Records and recorded their follow-up album, “Victims of Deception,” for Roadrunner Records in 1991. The album further established Heathen’s unique identity in the thrash scene with more complex arrangements and improved production, and continued to grow the band’s fanbase, allowing them to tour Europe for the first time with contemporaries like Sepultura and Sacred Reich.

An unexpected hiatus followed as founding member Lee Altus was invited to join the German industrial metal band Die Krupps and, later, thrash pioneers Exodus. Heathen never disbanded, however, and recorded a number of cover songs that were eventually released as the “Recovered” album in 2004.

Heathen returned to the stage in 2001 to play the Thrash of the Titans benefit show in San Francisco, reigniting their dedicated fanbase, and resulting in numerous offers for the band to play key European festivals in 2002 and 2003. The band returned to the Bay Area to write new material and released a demo in 2005, which was shopped to various labels and distributed to fans via the internet. The demo became so popular in the underground metal scene that the band even toured Europe in support of it. Soon afterward, Heathen signed a new record deal with Mascot Records and began writing more material for their third full length album.

In 2007, guitarist Kragen Lum joined the band, solidifying the core of the current lineup. For the next two years, Heathen wrote and recorded its most recent album, “The Evolution of Chaos,” creating what some reviewers have called one of the best thrash albums of the last decade. Drawing critical acclaim from all over the world, “The Evolution of Chaos” was released in 2010, debuting strongly on metal charts around the world and even placing at number 75 on the overall German popular music chart. By the end of the year the album topped many press and fan “Top 10” lists and landed at number 37 on the CMJ Year-End Loud Rock chart, above such metal greats as Dio, Halford and Lamb of God. The success of “The Evolution of Chaos” allowed Heathen to film a promotional video for the song “Dying Season,” and to tour Japan, Europe, North America and parts of Asia, visiting several countries for the first time ever during the album tour cycle.

The band is currently is working on the follow-up to “The Evolution of Chaos”, which is scheduled for release in early 2020 via Nuclear Blast Records.