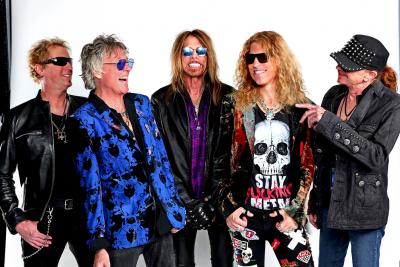 In 1988 their first single “Get It On” exploded at AOR radio, prompting their self-titled debut album Kingdom Come to ship gold. They released 2 more singles from the album, embarked on a sold-out European tour, and were invited to open for the North American Monsters of Rock Tour 1988. The festival was performed at stadiums across the United States in front of massive crowds. They later supported Scorpions on their North American “Savage Amusement” tour and performed in Japan with Bon Jovi and Ratt as well as their own headlining tour. In 1989, Kingdom Come released their second album In Your Face which sold almost 500,000 copies. They released three singles from the album and toured in support of it. While on tour the band would abruptly break up due to personal reasons.

Lenny Wolf would carry on under the Kingdom Come banner with a revolving door of mostly German musicians releasing 12 studio albums and 1 live album between 1991 – 2013, mostly limited to Europe. During this period the other original members worked with The Cult, MSG, and Warrant amongst others. Most notably, James Kottak became the drummer for German rock legends Scorpions, a position he held for 21 years. In 2016 Wolf issued a public statement that Kingdom Come was finished.

2018 marks the 30th anniversary of the band’s classic debut album, which is their most popular release internationally. James Kottak has revived Kingdom Come along with original members Danny Stag, Rick Steier, and Johnny B. Frank. Although Lenny Wolf respectfully declined to participate in the reunion, he fully supports the members moving forward without him. The current version of Kingdom Come includes singer Keith St. John (ex-Montrose) and will tour in 2018 – 2019 performing their debut album in its entirety along with music from their second album In Your Face.